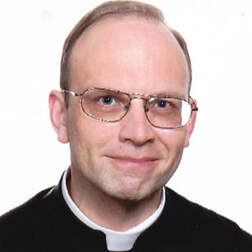 Brendan Gerard is superior of the house of the Priestly Fraternity of St Peter, Edinburgh and lecturer in New Testament at Priesterseminar St Petrus (Bavaria).

"About five years ago, I was referred to Alan Garrow’s articles making a case for Matthew’s use of Luke. I had previously been impressed by Mark Goodacre’s defence of Lukan dependence on Matthew, the hypothetical document Q being (on his view) superfluous. Alan’s arguments made me think again, both about the necessity of “Q” in some form (it is sometimes Matthew, sometimes Luke, who seems to give us the older form of this material) and about the real problem with Lukan dependence on Matthew: it is unlikely that Luke would systematically and meticulously have separated out Markan from non-Markan material where Matthew combines them.

With that in mind, what made me positively inclined to see Matthew as the borrower from Luke was some work I was doing on the Gospel burial narratives. Here, the minor agreements between Matthew and Luke are, as Ulrich Luz puts it, “spectacular.” There is verbatim agreement in the two evangelists’ phrasing of Joseph’s approach to Pilate (Matt 27,58 || Luke 23,52) and in their verb for the wrapping up of the body (Matt 27,59 || Luke 23,53). What is more, both have similar formulas (absent in Mark) to say “a man named Joseph” (Matt 27,57 || Luke 23,50), both agree on the new or unused status of the tomb (Matt 27,60 || Luke 23,53), and both omit two Markan features of the story: Pilate’s verification of Jesus’ death, and the purchase of the burial cloth.

For these two accounts to have arrived independently at the same range of divergences from their Markan source would be quite impressive, even when we allow for oral tradition. If we were to suppose that Luke has here made use of Matthew, we would then have to account for what Luke has omitted from Matthew’s version. Given his usual tendencies, it might be understandable for Luke to have suppressed Matthew’s description of Joseph as “a rich person.” But why should he have ignored the description of Joseph as a disciple, or the detail that the tomb belonged to Joseph, if these were available to him? If there is a direct literary relationship between Matthew and Luke in this passage, it is easier to regard Matthew as the borrower from Luke than vice versa. Alternatively, even if one would rather not posit direct dependence, preferring to explain these minor agreements in terms of "secondary orality," it is still more plausible that Matthew has used a post-Lukan retelling of the story than the reverse."