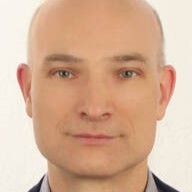 Bartosz Adamczewski is Associate Professor of Biblical Studies at the Faculty of Theology at Cardinal Stefan Wyszyński University in Warsaw, Poland.

"I first began to think of Matthew as being written later than Luke during my research on the Dead Sea Scrolls. My first idea of a topic for my habilitation was just that: the dead Sea Scrolls, a body of writings that is new to all scholars and that has no traditionally established categories, solutions, criteria, dating, etc. I read them all, and I read almost all literature that was published on them thus far. Trying to analyse various versions of the penal codes that are contained in the so-called Damascus Document and in the so-called Community Rule, I realized how difficult it is to assess the relative priority and posteriority of texts that are quite similar to each other and that have no contextual or traditional relative dating. In particular, I discovered how reversible the criteria to assess such priority and posteriority are: shorter and longer version, elaboration and simplification, development and compactness, one occurrence and numerous occurrences of a given term, etc. In this context, I understood that all our traditional solutions of the Synoptic Problem are in fact based on the sand of such largely reversible criteria.

Moreover, when I studied Luke’s Gospel against this pre-70 CE Jewish background, Luke struck me as being well acquainted with particular Jewish ideas that were not typically biblical and that were somehow discussed in the Dead Sea Scrolls: heptadic calculations of time from the beginning of the world until the present decisive era (Apocalypse of Weeks), saving a man in a body of water/dropsy on the Sabbath day (Damascus Document), etc. On the other hand, I perceived Matthew as generally based on the standard biblical ideas of the Old Testament, with no great acquaintance with the ideas of the Dead Sea Scrolls. Accordingly, I realized that, in contrast to the traditional views, Luke is not typically Greek, and Matthew is not typically Jewish. In fact, Mathew seems to be more distant from the pre-70 CE Judaism of the Dead Sea Scrolls but closer to later Rabbinic Judaism. This led me to entertain the possibility that Matthew was written later than Luke.
Further encouragement to perceive Matthew as later than Luke came with reading Martin Hengel’s English-language paperback book on the Four Gospels (2000), which he published in his own native German language only later, shortly before his death, probably being afraid of the reaction of the conservative Q-oriented German scholars.

The development of my own hypothesis came with the analysis of the Lukan ‘travel narrative’. Having worked many times as a guide in the Holy Land, I realized that the lament over Jerusalem in Lk 13:34–35 could not be uttered in Galilee because of its great distance from Jerusalem, even today in a comfortable air-conditioned bus. Moreover, the following stories on table fellowship in Lk 14 have nothing to do with this lament. Having written my PhD on Paul’s theology, I realized that I knew such a sequence: it originates from Galatians 2: the fierce dispute in Jerusalem (Gal 2:1-10) and the following discussion on table fellowship in Antioch (Gal 2:11-14). Consequently, I investigated the Lukan Gospel as a sequentially organized, highly creative (hypertextual) reworking of the contents of Paul’s letters. A similar discovery came later in my analysis of the Gospel of Mark.

As concerns Matthew, I often taught my Catholic seminarians that Peter plays an important role in several stories in its central section. I realized that Peter plays a similarly important role also in the central section of the Acts of the Apostles (esp. Acts 15). This led me to develop my hypothesis that Matthew used the whole Luke: not only his Gospel but also his Acts of the Apostles. Even if the wording of Matthew largely comes from the Lukan Gospel, the order of topics and ideas reflects that of the Acts of the Apostles.
​
Having read Michael Goulder’s works on his reverse hypothesis (Luke’s use of Matthew), I knew that in order to prove such a non-Q hypotheses, we need detailed commentaries on the whole works, not only publications concerning minor issues, which can always be treated as reversible (Luke influencing Matthew or Matthew influencing Luke). Therefore, the final (thus far) development of my hypothesis has been formulated in a thorough hypertextual commentary on the Gospel of Matthew, in which I argue that Matthew followed the sequence of the contents of the Acts of the Apostles, and used the Gospels of Mark and Luke to illustrate these contents."