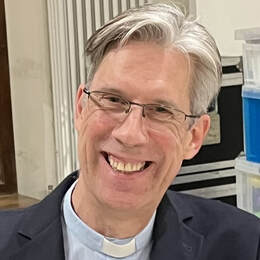 Alan Garrow is Vicar of St Peter's Harrogate and a member of the Sheffield Centre for Interdisciplinary Biblical Studies (SCIBS). He first became interested in the possibility that Matthew used Luke while he was a postgraduate student.

"My attitude to the Synoptic Problem was influenced, during my undergraduate studies, by RT France. He was highly sceptical of Q and also generally steered clear of favouring any one hypothesis. By the time I finished my BA, therefore, I was definitely a Q skeptic - although one that generally leaned towards the Farrer Hypothesis.

A major change occurred in 1998 during my doctoral studies (supervised by the 2DH advocate Christopher Tuckett). While working on the Didache's relationship to Matthew's Gospel I came across the curious triangular relationship between Did. 1.2-5a, Matt 5.38-48 and Luke 6.27-37:

These Didache sayings are remarkable because there are very good reasons for suspecting that Did. 1.3-5a was added to a version of the text that already included Did. 1.2. This is important because, in Luke 6.27-36, elements similar to both Did. 1.2 and 1.3-5a are combined into a seamless, unified whole. This caused me to suspect that Luke's set of sayings had been woven out of the cloth provided by the whole of Didache 1.2-5a (rather than the reverse as was more commonly assumed). Furthermore, I then noticed a very peculiar pattern of similarity and difference between all the three versions: wherever Matthew's version is dissimilar to Luke's, his version is similar to the Didache's. The only reasonable way to explain this, it seemed to me, was to allow that that Matthew had attempted to conflate Luke's version with the sayings in the Didache. (A fuller presentation of this proposal is offered here).

Contemplating this possibility reminded me of a comment made by Michael Goulder in, 'Is Q a Juggernaut' (JBL, 1996): '[I]n a scientific subject a paradigm shift is possible because new and irrefutable evidence may come to light, new evidence in arts subjects is rare, and so are paradigm shifts' (p. 669). Here, it seemed to me, was a tiny piece of new evidence. It was tiny, but it was enough to shake me out of my prior assumptions. Why could not Matthew have used Luke? And why, if Matthew used Luke, could they also not have had access to sources they both shared (in addition to Mark)?

Once I started to look at the Synoptic relationships with these questions in mind I came increasingly to suspect that Matthew was an author who had sought to harmonise and conflate together a range of earlier traditions, including Mark, Luke, portions of the Didache, and probably several other written and oral sources. This line of approach, it seemed to me, preserved all the strengths of the Farrer and Two Document Hypotheses without reproducing their weaknesses.

Sometimes friends suggest that my arguments for Matthew's use of Luke would be more appealing if I kept it simpler - i.e. stopped including Did. 1.2-5a. I understand what they mean, which is why I tried to keep the Didache to one side in my initial presentation of the Matthew Conflator Hypothesis. For me, however, Did. 1.2-5a is the jewel of great price that has lain abandoned in a field since its discovery in 1873. New historical evidence of this quality, as Michael Goulder rightly observed, hardly ever comes to light. It seems a shame, therefore, to refuse to allow it to shake our old assumptions. But, of course, such a suggestion is stupidly naive. If we allowed our old assumptions to be disturbed, we would face the massive upheaval of having to wrestle with something disturbingly new."